This was such a blatant lie on Vice President Cheney’s part that I had to post something. In the debate on October 5th with Senator John Edwards Cheney said “Now, in my capacity as vice president, I am the president of Senate, the presiding officer. I’m up in the Senate most Tuesdays when they’re in session. The first time I ever met you was when you walked on the stage tonight.” Which is amazing because they met in February 1, 2001 at a Senate prayer breakfast.

Here is the pic from CNN: 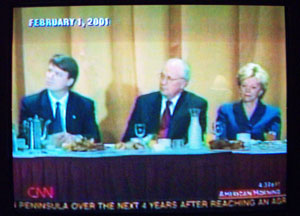