Yet another iPhone post: Issues with as well as Price Cut 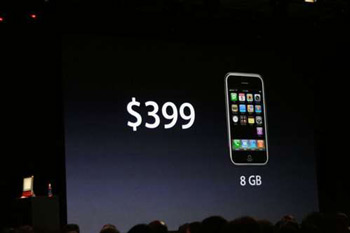 So I broke down the other day and headed over to the AT&T store near my building in Times Square. Unless you have been living in a cave for the past few days you undoubtedly heard that Apple dropped the price of its mu touted iPhone device, originally the 8 GB model was $599, now its $399. Right away that got me thinking and i felt that all the trade offs were now worth while, I will get to my dislikes later.Unfortunately the price cut has over shadowed all news with the new iPod devices, and on trading days when Apple’s stock should have risen it has fallen almost 10 points. The other devices include a video iPod Nano, big hard drive and UI upgrades to the “iPod Classic” (80 GB and 160GB models!) and a thing called iPod Touch, which is basically an iPhone with more space and no phone. It was WiFi too! Whats even better is they are releasing an iTunes WiFi store that can be used on the iPhone and iPod Touch, a great way to nab impulse buyers.Once again though the price cut over shadowed all other news, all the product updates were buried. Early adopters were pissed and rightly so. Yesterday Jobs released a press release, they will refund $200 to all those who purchased iPhones within the last 14 days, for all those who waited online back in July Apple will give you a $100 store credit. At first you would think that that would hurt Apple, think again. Profit margins on most stuff in the Apple store are so high, that the store credit will only cost Apple $30 – $50 a person, that and they might earn excess revenue from people using for more expensive gadgets, like deciding to get that laptop you always wanted. Smart move Jobs, not only have you managed to keep the iPhone in the news with the cut, but you managed to keep it in the news until Friday.Now after having it for 36 hours (I still don’t have incoming service, thanks AT&T) it is definitely a neat toy. I can say that I am more than happy with it. Though there are a few software things I hope apple addresses, they are as follows:

Other than that I have no complaints 😀